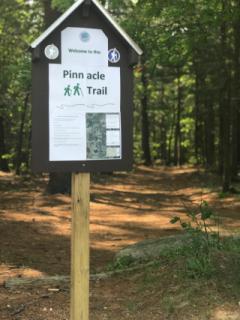 In 2004, due to the incredible efforts of dedicated residents of the Town of Tewksbury, a significant Act was passed by State Legislators and signed by Governor Mitt Romney, 'Designating Certain Lands in The Town of Tewksbury for Conservation, Agriculture, and Passive Public Recreational Purposes' that included 9 parcels and a total of 410 acres. This Act further indicated that the specific parcels were 'hereby dedicated to the public for the purposes and uses of forest, agriculture, and open space protection, management and conservation, environmental education and public access for passive recreation and enjoyment and shall be held solely for these purposes and uses.' This was a significant accomplishment to the Town of Tewksbury for many reasons with one of which being that it provided a large track of contiguous open space land along the proposed Bay Circuit Trail route in Tewksbury.

Soon after the completion of this boardwalk, volunteers and Town staff were eager to promote the new gem of open space land ready for all Town residents to enjoy. As a result of this, Tewksbury Town staff and member of the Open Space Committee, Bruce Shick, met with the State Hospital to revise the existing Memorandum of Understanding to include allowing for kiosks, trail markers, directional arrows, and designated parking areas (memo attached). Since that time, volunteers have been working hard to incorporate these improvements into the trail system to make it more accessible for all Tewksbury residents.

In addition, several side loops have been created off of the main trail by the efforts of volunteers including one off of Pinnacle St as well the 'The Pines' Cemetery trail loop both of which are shown on the attached map.