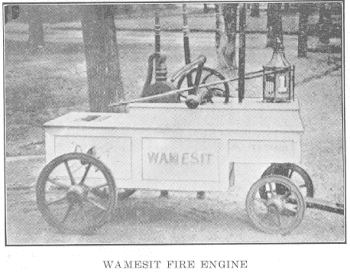 A volunteer fire department was organized in 1798 in Belvidere Village. The apparatus and equipment were bought by private subscription. In the Town Records of March 4, 1833, the town took over maintenance and appropriated the sum of $150 to purchase hose and equipment. When Belvidere was annexed to Lowell this fire engine was taken over and for many years was stored in the Central Fire Station in Lowell. The General Committee appointed to conduct the 200th Anniversary of the Incorporation of the Town, believing that it was proper to request the return of this original piece of Tewksbury fire apparatus, communicated with Hon. James J. Bruin, Mayor of Lowell, and with his recommendation a letter was forwarded to the City Council and it was unanimously voted to return the Wamesit Hand Pump to the Town of Tewksbury. Today the Wamesit Hand Pump, given the name "Always Ready", stands on display at the Tewksbury Public Library. The old Tewksbury Fire Barn was the former old carriage house of Dr. Enoch Foster. The current Town Hall is barely visible to the right of the fire barn. 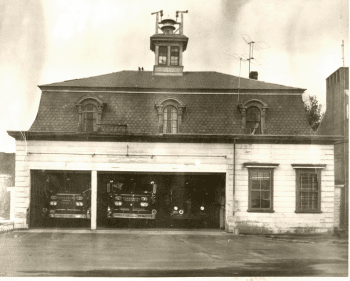 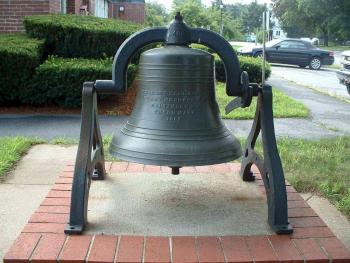 The Spaulding Bell sits prominently in front of the Central Fire Station.  It was dedicated to Tewksbury's deceased firefighters in September 1986 after being housed in the belfry of the first Tewksbury High School in 1887and then in the Foster School in 1906. View more information about the Spaulding Bell. The bell came to Tewksbury in 1887, the year in which it was cast.  It arrived in Tewksbury at a time when the center of town was referred to as Tewksbury Village.  Benjamin Spaulding was the founding member of a group known as the Village Improvement Association.  He served as the first treasurer as well as a founding member and trustee of the present-day Tewksbury Cemetery Corporation.  His service on Tewksbury's Water Supply and Fire Protection Committee appropriately bonds his commitment and service to the community with that of our deceased firefighters. View  information about the Spaulding Bell (PDF)

The picture below shows the Gamewell horns taken from the old fire barn. They currently sit atop the hose tower of the Center Fire Station. In the background between the horns,  Dr. Foster's house can be seen on Dewey Street.  was moved from its original location to make way for Town Hall 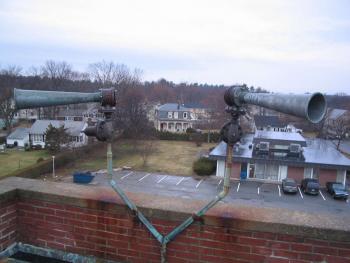